"We're Not Friends" is the 5th episode of How to Get Away with Murder.

Annalise takes on a tough case defending a minor who fatally shoots his police officer father. Meanwhile, Annalise and Sam continue to argue over his relationship with Lila, and Wes and Rebecca begin to question Annalise’s motives. In flash-forwards, we learn more about Laurel's relationship with Frank and why he was calling her the night of Sam’s death.[2]

“Why is your penis on a dead girl’s phone?” That’s the question Annalise posed to her husband about his relationship with Lila Stangard. Sam admits that he had an affair over the summer. He lied because he was afraid Annalise would think he hurt Lila. Sam forcefully tries to get his wife to stop yelling. Annalise pushes him away. She orders Sam to get out. Bonnie overhears what’s happening. She exchanges a momentary look with Sam before he rushes off.

Annalise interviews a young man, Ryan, who shot his police officer father to death. He couldn’t take the constant abuse the guy was inflicting on his mother. He’s glad he shot him. Things are better now that dad is dead. The cops are painting Ryan as a sociopath. Laurel makes an emotional scorecard to chart the jurors. Annalise is dealt a severe blow when the judge refuses to allow the abuse claims to be introduced into the trial.

Laurel is happy to finally have a client she likes. She and the other students are assigned jurors to watch. As for the trial strategy, if a prosecution witness mentions Ryan’s blog detailing the abuse, it can be entered into evidence. Thanks to some quick thinking by Laurel, that’s exactly what happens. Later, Kan dispenses some advice. It involves jury nullification. Speaking of the jury, Connor is able to prove one member is biased. An alternate juror is put into the mix. Still, there’s not enough to side in their favor.

Ryan’s mother testifies about the abuse she endured from her husband, but the prosecution’s cross hurts. Laurel continues to keep track of every juror’s reactions on her emotional scorecard. Later, she blows off Kan’s offer to grab a bite to slip a juror knowledge about jury nullification. Frank catches her in the act. This gives Annalise an idea. She wants Frank to let the D.A. know that the jury has been tampered with. A mistrial is declared.

The mistrial is good news for Ryan. He’s no longer viewed as a sociopath and his case is kicked to juvenile court. As for Laurel, the end of this case served as the beginning of her relationship with Frank. She kisses him, but doesn’t sleep with him. She turns to Kan to satisfy her need for some more passionate action.

In a flash forward, we see Frank calling Laurel. The reason: she’s sleeping with him. Laurel answers the call to help establish an alibi about being at the bonfire. Frank is apologetic. He’ll do whatever it takes to make things right between them. Laurel tells him it’s too late. Then she volunteers to be the one who returns the trophy to Asher. She calls on Frank for help with this task.

Six weeks earlier, a distraught Annalise drinks a lot. A now-unemployed Nate doesn’t believe she’s not the one who told his boss about their affair. Annalise knows it was Bonnie. Sam admits to her that he skipped his Yale lecture because he feared Lila was going to hurt herself. Annalise brings Rebecca over to the house to see if she knows anything about Sam. She watches their chat via a video feed. Rebecca knows about the penis picture. She just doesn’t know who it belongs to. Lila never used the guy’s real name. She just referred to him as Mr. Darcy.

Rebecca wonders what kind of person lies his way into jail to help his potentially murderous neighbor. She assures Wes that she’s not a killer. She just likes making people feel uncomfortable. Rebecca clears out her apartment. She tells Wes via a phone call to look at the wallpaper at Annalise’s place. It’s a match for the one seen on Lila’s phone. Wes confronts Annalise. He knows Sam is Mr. Darcy. 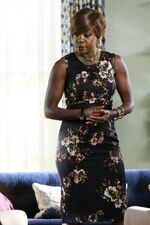 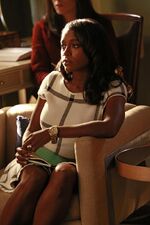 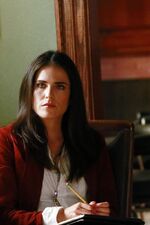 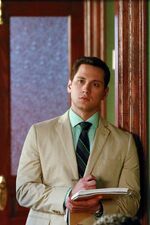 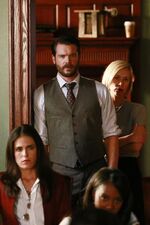 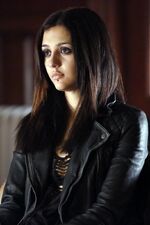 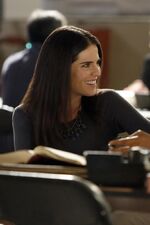 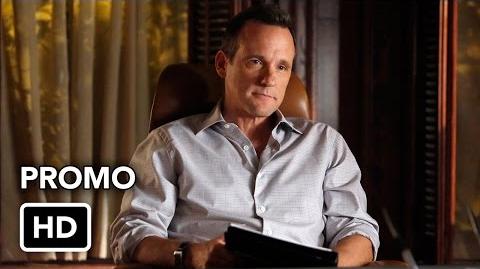 Retrieved from "https://howtogetawaywithmurder.fandom.com/wiki/We%27re_Not_Friends?oldid=22536"
Community content is available under CC-BY-SA unless otherwise noted.