"Was She Ever Good at Her Job?"

"You're doing it again looking for a mommy everywhere you go. Me, Tegan, whatever woman you encounter next you want us all to be the mother yours never was."
—Annalise Keating to Michaela Pratt

"Was She Ever Good at Her Job?" is the 49th episode of How to Get Away with Murder.

Feeling like she’s found her purpose again, Annalise focuses on developing her big case and Bonnie grows suspicious. Meanwhile, Connor gets a surprise visit from his dad, and Laurel turns to an old friend to relieve some stress.[2]

Annalise started work on her class-action lawsuit. She knew she would need to fight the governor, target the disgraced head of the public defender’s office, gather at least 40 clients and find money to fund the suit. As Bonnie told D.A. Denver they should review the old cases that were now in doubt, Annalise offered her legal services to Middleton University president Soraya, arguing that she was getting a sham deal in her custody battle. When the pair went to a meeting at the law firm, they ended up meeting with Michaela and Tegan, who was Soraya’s original counsel.

The two lawyers jostled with the opposing attorney, who had video evidence of her drunken behavior and wanted $6 million for the estranged husband. Annalise and Tegan had different ideas on how to proceed. Michaela offered to step off the case, but Tegan said she should be a “boss bitch” and swallow her anti-Annalise feelings. She took that advice to Annalise, who was not receptive. Annalise filed a counter-suit on Soraya’s behalf and then went to therapy with Isaac, where she didn’t want her “good mood” ruined. He again questioned the motives of her class-action suit, suggesting she was using it as a distraction from her grief and guilt from Wes’ “suicide.” She later learned she mistakenly sent Soraya’s lawsuit to the college and she was in jeopardy of losing her job and her kids.

Soraya was furious, lashing out at Annalise, “You have no children! You don’t know what it feels like to lose them.” Annalise swore it was a mistake and she was sober, vowing to “fix this.” She found Frank waiting for her at home, armed with a suitcase full of cash. It was the money he was paid for the part that he played in stopping Annalise years ago, “That’s my dead baby in that suitcase. Don’t you know that? All you do is hurt me,” she cried, sending him away. Annalise was at least pleased when Isaac gave her a favorable progress report, and it gave her the idea to go through Soraya’s husband’s therapist notes to see if he’s really suffered “emotional distress,” as he claimed. Going through the notes, Michaela concluded Soraya’s husband had seemingly cheated with someone named Sue. In actuality, he met with a financial advisor named Sou, which indicated he was illegally hiding assets. With that discovery as leverage, Soraya was able to get a good deal for custody.

Amidst this, Denver, who was running for attorney general, demanded Bonnie fire Laurel as her intern at the office, but she said she couldn’t because that would be discrimination since she’s pregnant. Nate also told Bonnie to be careful with the cases she was investigating. Laurel wanted to take down Denver in addition to her father, but Michaela said she couldn’t go through Tegan’s files. Meanwhile, Oliver questioned Connor over his strained relationship with his dad, who secretly met with Oliver and expressed interest in repairing the dynamic. They went to the apartment to surprise Connor, only to find him naked. He was forced to host a party for his dad and friends, and thought his father only wanted the money from his canceled tuition. He insisted that wasn’t the case. After the bash, a horny Laurel went to Frank for companionship and they hooked up.

Connor tried to give his father his money back. His dad rejected the check and instead told his son that he was “faking” his happiness with Oliver, who wasn’t right for him, leading him to storm off. Soraya, with her job also now secure, offered to pay Annalise and go to AA meetings together. Tegan was also impressed and suggested she join the firm, which infuriated Michaela. “I’ve made a place for myself here. It is mine and I have a real mentor this time,” she complained. Annalise said she was just again looking for the mother “yours never was.” Nate later confronted Annalise about what she was “up to now.”

Annalise explained her suit was for Wes and all “wrongly accused,” as Isaac recorded notes saying she was at risk of relapsing “or worse” if her legal battle fails. Laurel concluded her dad was paying Denver to cover up Wes’ murder, Connor blew off Oliver, and Michaela and Laurel went to Oliver for IT help getting into Tegan’s files. Bonnie theorized to Nate that Annalise really wants to be the new chief public defender and Nate wasn’t interested in her apparent obsession over her former boss. Isaac admitted on his recording that Annalise is a “trigger” for him and then welcomed his new patient: “Julie,” who was really Bonnie. One and a half months later, Isaac was consoling a crying Michaela at the hospital as he ignored “Julia’s” call. Bonnie arrived at the law firm, which was also a bloody crime scene. Oliver sat there in shock as a witness to whatever went down. 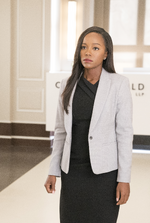 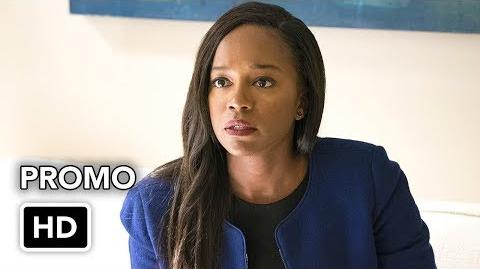 How to Get Away with Murder 4x04 Promo "Was She Ever Good at Her Job?" (HD) Season 4 Episode 4 Promo 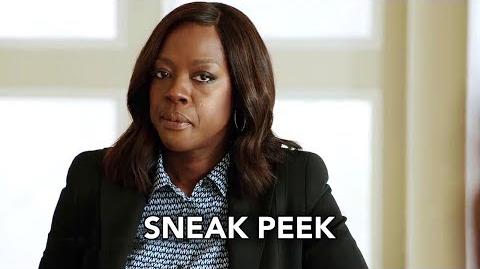 Retrieved from "https://howtogetawaywithmurder.fandom.com/wiki/Was_She_Ever_Good_at_Her_Job%3F?oldid=25684"
Community content is available under CC-BY-SA unless otherwise noted.