Ursela Mamoon is a minor character on How to Get Away with Murder. She worked for Jorge Castillo and she was with him when they met with his daughter, Laurel Castillo.

At Antares Technologies, Jorge Castillo calls Ursela into his office in order for her to work with him and his daughter to resolve some of the conflicts between them. They begin talking about her mother and their issues created by him leaving her. Laurel informs Ursela that her father left her mother after she had a mental break and met his current wife, Elena Castillo a month later. Jorge tries to come up with excuses for those reasons which results in the two exchanging various dialogues in Spanish. Ursela gets them to stop and revert to English as she doesn't speak Spanish meaning that she wouldn't be able to resolve anything if she doesn't understand them. Laurel then brings up the time when she was kidnapped when she was 16 and Jorge failed to pay the ransom. Jorge claims that the government refused to let him pay it but his daughter says that if he really wanted to he would've found a way. Later, the two solved their differences and became able to talk to one another without arguing. ("Always Bet Black") 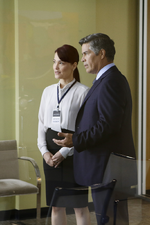 Retrieved from "https://howtogetawaywithmurder.fandom.com/wiki/Ursela_Mamoon?oldid=25411"
Community content is available under CC-BY-SA unless otherwise noted.