This season follows Professor Annalise Keating's (Viola Davis) class through their final semester in law school – while the deception, fear and guilt binding Professor Keating to her students prove deadlier than ever.[8] 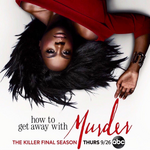 Retrieved from "https://howtogetawaywithmurder.fandom.com/wiki/Season_6?oldid=27354"
Community content is available under CC-BY-SA unless otherwise noted.