How to Get Away with Murder Wiki
Register
Don't have an account?
Sign In
Advertisement
in: Characters, Minor Characters, Season 4 Characters, Deceased Characters

View source
watch 02:51
'How to Get Away with Murder' Profile: Sandrine Castillo
Do you like this video?
Play Sound

"Nobody Else Is Dying"
"Your Funeral"
"Make Me the Enemy"
"Stay"

Killed, likely by an unknown hitman, on orders of Jorge Castillo and later scalped [1]
"The Day Before He Died"

"She talked to me each night until I fell asleep. She made sure I ate, took my medication bathed me. That's how I know Laurel will be an excellent mother. Because she had always been one for me."
—Sandrine to Annalise about Laurel in court.[src]

Sandrine Castillo is a minor character and antagonist on How to Get Away with Murder. She is French and the mother of Laurel Castillo. Following a fight between her and her daughter, Sandrine wasn't seen again, though Laurel said that she was alive. Her apparent scalp was later delivered to Laurel's doorstep, suggesting that something might have happened to her afterall. She was killed on the orders of Jorge Castillo after she informed against Antares and went into witness protection.

While married to Jorge Castillo, she had a daughter, Laurel Castillo and a son Xavier Castillo. Her mental health though deteriorated and she was diagnosed with Bipolar I disorder. She was later divorced and institutionalized in a mental health facility. ("He's a Bad Father")

"She's going to break your heart, Christophe. She spent her life trying to fix me, and now she tries to fix men. She did the same with Dominick, and Frank, now you."
—Sandrine Castillo to Wes Gibbins regarding Laurel Castillo, a day before the Fire at the Keating House[src]

On November 2, 2015, Wes was receiving a call from Laurel's mom, Sandrine Castillo, asking for him to go and meet her. She knew his real name, Christoph, and he secretly recorded their conversation once he got to the diner. She referenced his legal troubles and offered to pay him to stop seeing Laurel. She gave him a check for $100,000 and told him to contact her through Dominick. When Wes tried to resist, her mom warned him that Laurel would break his heart. Wes took the check but later ripped it up and transferred the audio recording to a flash drive, which he hid in his apartment. Wes later called Dominick and left a message asking for help while in a taxi. Ten minutes later, Sandrine called Wes asking him what was wrong. Wes said that he was in trouble with the police. Sandrine asks what he was in trouble for and he told her that whatever it was that it might implicate Laurel. Wes told her to do whatever it takes to keep her safe. Starting to become worried, Sandrine offered her help but Wes turned it down and hung up the phone. Sandrine then called Jorge and told him about what was happening with Wes. Jorge then got in contact with Dominick and told him to take care of Wes. ("The Day Before He Died")

Around May 2016, after calling Dominick and her daughter unexpectedly answered, Laurel lied and explained that Dominic was killed by her father, Jorge. She then explained that she had a kid and wanted her mother to testify on the stand that she was mentally fit and could look after her newly born son. Sandrine then turned up at the courthouse in Philadelphia to testify in the custody hearing. She ran up to her daughter and hugged her. She then moved to Annalise and thanked her for everything that she did for Laurel. In the courtroom, Laurel denied using cocaine during her pregnancy and Annalise disputed the positive drug test results from the hospital. Under cross-examination, Laurel acknowledged previously doing cocaine. The opposing attorney, however, argued she did cocaine to kill the baby. After court, Sandrine went back to Laurel's apartment where she tries to ask her about Frank but Laurel doesn't want to talk about her love life. At the second day of the hearing, Annalise told Sandrine she didn’t have to testify if she was “too scared.” She insisted she could do it. Annalise questioned her mother’s poor parenting on the stand. The line of questioning led Sandrine to tearfully explain how Laurel took care of her. So Isaac took the stand and testified that Laurel showed no sign of drug use or depression. The opposing attorney brought up Isaac’s daughter’s death to question his credibility and with the case on her death reopening, his testimony was made inadmissible. The judge said that she was extending Jorge’s custody order. She later asked her mom at her apartment, “What if I’m wrong about dad? What if he didn’t hurt Wes?” ("Everything We Did Was For Nothing", "He's a Bad Father")

After the losing the baby to her ex-husband, Sandrine continuously called Jorge asking him to let Laurel see the baby. Laurel put her back on a plane to Mexico until the custody could be sorted out. Not long after, Laurel received a phone call from the judge granting her some time with her son. Laurel then flew her mother back to the country so that she could go with her when she visited her child. At the hospital, Sandrine waited for Laurel. When she arrived, Frank was with her. Laurel’s mom was dismayed to see Frank there. She claimed she convinced her dad to let her meet the baby without him. Frank, of course, knew from phone records that Laurel’s mom and father were in secret communication. Laurel was tearfully reunited with her baby, whom she named Christopher in honor of Wes Gibbins. Her mom approved, however, the visit was short and they were all asked to leave. Later, Sandrine was getting ready to leave the country for Mexico again when she was approached by Frank. He asked her “How’d you know Christoph?" She claimed she didn't have anything to do with his death.[2] ("Ask Him About Stella")

After finding the voicemail which depicted Sandrine and Wes' conversation the day before he died, both Frank and Laurel approach her at her apartment. Sandrine says Wes was a murder suspect and she wanted to protect her daughter. Laurel accuses her of having Dominick kill Wes. She flatly denies it, but Laurel begs her to stop lying. Sandrine is later visited again by Laurel, this time with her phone records of the night that Wes died which depict her calling Jorge immediately after she had gotten a call from Wes. Sandrine insists it’s because she wanted to help Wes, but Laurel isn’t having it, accusing her mother of being out to protect her bank account and ensure Antares could go public without scandal. Laurel assumed Denver or Dominick warned her father Wes was going to the police, but now she knows it was her mother. Together, they killed Wes, the person she loved most. Following this, it is assumed that some sort of fight occurred between Sandrine and Laurel as Laurel came home with scratches all over her arm. Sandrine also apparently disappeared leaving behind no trace being as no one was able to find her following her encounter with her daughter, leaving people to speculate that Laurel had something to do with her disappearance. ("The Day Before He Died", "Nobody Else Is Dying")

"Are you asking me if I'm happy she's alive? I don't really care, as long as she stays away."
"Moms don't typically like to do that."
"Good moms. That's not her. She just wants to look like one. That's why she sent me that stupid gown not because she is actually religious, but because she's afraid of looking like a bad Catholic.

A few months later, despite their fight, Sandrine sends Laurel Castillo her baptism dress which she wore during her christening when she was a baby. Sandrine sends this because She found out that Christopher Castillo was being baptized. ("Your Funeral")

A couple of months later, Laurel is sent a box similar in size to the one Sandrine sent with the baptism gown in it. Inside Laurel finds a gift bag containing her mother's scalp. It is implied Laurel's brother, Xavier, is responsible for Sandrine's death.("Make Me the Enemy") 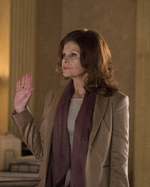