† Bonnie Winterbottom - Girlfriend (until his death)

"I want to love you until the day that I die."
—Ronald Miller to Bonnie Winterbottom.[src]

Interim D.A. Ronald Miller was a supporting character on How to Get Away with Murder. He was an assistant district attorney who worked alongside Bonnie Winterbottom at the District Attorney's Office. D.A. Miller was brutally beaten by Nate Lahey after Nate confronted him about his suspicions that he ordered the death of his father, Nathaniel Lahey, Sr.. He was later found painfully dying by his, at the time, girlfriend Bonnie Winterbottom who suffocated him to save him some misery and protect Nate. It was later revealed that Xavier Castillo approached the D.A. with the plan to murder Nate Sr. Miller pretended to go along with the plan but instead begged the prison warden to move up the transfer in an effort to stop the shooting from happening. This failed and Nathaniel Lahey, Sr. was subsequently killed. Miller never reported Xavier Castillo to the feds as the previous D.A., Todd Denver, had already been murdered by the Castillo family, more specifically Xavier's father Jorge Castillo, in an arranged car accident for working against them. Ronald Miller was one of the murder charges in Annalise's indictment

Ronald was tasked with making sure that Jasmine Bromelle remains in prison. During the first part, Miller argued to the judge in court that the case didn't need to go to trial again as they already had one where she was convicted of prostitution and drug trafficking. Annalise argued that she wasn't treated right. The judge agreed and sent the case to trial which was set the following day. He was later visited by Annalise at the District Attorney's Office where she got him to confess that she would have been charged with other convictions but chose not to. He tells her that she should check out the bock cam footage of the police officer that arrested her. The following day, Annalise called Mr. Hedstrom to the stand where she questioned him about Jasmine's juvenile record. Annalise questioned why Jasmine wasn’t treated as a victim when she was taken into custody as a teen and confronted the now-retired prosecutor on why, as a black girl, she was treated differently than white girls in the same situation. Her argument was that that started a lifelong pattern that never should’ve been, and demanded all her subsequent convictions be vacated. The presiding judge apologized on behalf of the wrong previously done to her and said he would seal all her prior convictions so she could move forward without a criminal history. ("I'm Not Her")

After the events of the death of Stella Roa were questioned, the D.A. opened a case against Isaac for the murder of his daughter. Miller was given the case. Due to other, more important cases, Miller put the file at the bottom of the pile. He was later visited by Bonnie Winterbottom in his office where she offered her help with the case. Bonnie resorted to flirting with the ADA to try and get him to tell her details on the case. Miller told her that they hadn't even charged Isaac yet to which Bonnie told him that she could also help with that. Miller agreed. Later in the day, Miller went to Bonnie's office and asked her if she had found an angle for the case yet. She stalled and claimed that she hasn't found anything. Understanding that she needed more time, Miller asked her if she wanted to go for the drink that she offered. Bonnie, conveniently got a phone call and asked if they could reschedule; Miller agreed. Later, Bonnie submitted her report on the case to which he initially agreed with her statement, that there wasn’t enough to charge to Isaac but said he’d be an “idiot” to trust her. He deduced she was still working with Annalise and said that regardless, nothing explained why a girl with no drug history suddenly obtained pills and used. So he convinced Denver that they should charge Isaac with “death by delivery” and possibly “murder two.” Bonnie then went to Denver herself and blackmailed him into dropping the case. ("Ask Him About Stella")

After the suspicious death of D.A. Todd Denver, Ronald took temporary leadership of the department. Ronald gathered staff of the District Attorney's Office and during his speech, Ronald is visibly shaken by Denver's death and urges them all to give full cooperation to the FBI. He then takes a moment to honor Denver. Later, Ronald enters Bonnie's office and asks her why the FBI is meeting with her intern and makes a sexist joke about pregnant women and hormones. He then apologies for being a “frat boy” and buries the hatchet with Bonnie. He then tells her that he cannot run the office without her. Sometime later, Bonnie is on a dating app when she was marched with Ronald. She swipes left, indicating that she likes him and it tells her that he also swiped left, indicating that he likes her too. Ronald then got notified of their match on his phone and looks at their match in his pocket. He looks over at her office and Bonnie awkwardly smiles at him, he smiles back. ("Nobody Else Is Dying")

Towards the start of season 5, Bonnie gets close to Miller to find out how much he knows about Annalise and the Keating 4. Due to his close relationship with Denver, Bonnie worries that he may have some knowledge of the content of the files Denver kept on the group. Bonnie begins to fall for Miller as the season progresses. Annalise worries that Miller is playing Bonnie and disapproves of his and Bonnies relationship. Miller gives Asher a job at the DAs office after Annalise turned him down to for her legal clinic. When Asher finds out that Bonnie and Miller have a relationship, he offers her his support to her after telling Miller that they have a romantic past. As the season progresses, Miller and Bonnie get closer, despite Bonnie refusing to publicise their relationship. When Bonnie finds out her baby may be alive, Miller takes her to her sisters house to find out the truth and supports her when she finds out the baby is in fact dead. Later on, Nate convinces Miller to use his contact at the Governors office to get his father transferred to a mental health facility, which Miller does.

Annalise makes a deal with Governor Birkhead and Nate senior is pardoned. As he is being released from prison, he is killed by guards under mysterious circumstances. Miller works with Annalise to get an inquest into Nate senior’s death. They however lose and the jury decides there’s no reason for any further investigation.

Before Connor and Oliver’s wedding, Miller begins to verbally attack Annalise to Bonnie, who begins to suspect that Annalise may have been right about him playing her, and that he may have had something to do with Nate’s dads death. She leaves for the wedding without him. Later on at the wedding, Miller arrives with a ring, intending to propose to Bonnie. Before he can. However, Bonnie turns on him, accusing him of having Nate’s dad killed for Governor Birkhead. Bonnie tells Miller to leave and he gets in his car, but decides not to leave and instead goes to find Bonnie in the wedding. Outside the wedding tent, he is confronted by Nate who uncovered a photo of Miller at a payphone, calling the prison warden the night Nate Senior was killed, leading Nate to believe Miller was the one who ordered the hit on his father. Miller swears his innocence to Nate, who, in a moment of blind rage, violently beats Miller. Bonnie exits the wedding with Christopher in her arms, and finds Nate with a dying Miller. Bonnie suffocates Miller and tells Nate to put the body in his car and leave. Nate does so, finding the ring in Miller’s pocket as he’s putting him in his car. ("I Want to Love You Until the Day I Die"). Bonnie later obtains the recording of the phone conversation between Miller and the prison warden, proving his innocence. ("Don't Go Dark On Me"). 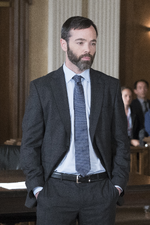 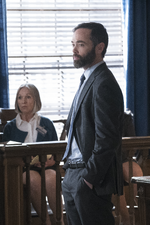 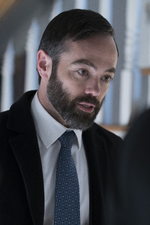 Retrieved from "https://howtogetawaywithmurder.fandom.com/wiki/Ronald_Miller?oldid=28727"
Community content is available under CC-BY-SA unless otherwise noted.