Renee Atwood is a supporting character on How to Get Away with Murder. She was an A.D.A. and was dating Nate Lahey. She serves as the primary antagonist for the first half of Season 3 and a secondary antagonist of the second half. She was fired when it was revealed that she had Wes Gibbins' body moved which was subsequently cremated.

Renee: "I feel bad having to spell this out, but there's no deal for you here, Annalise. And when I say here, I mean this whole office."
Annalise: "That sounds like prosecutorial misconduct to me."
Renee: "No, no. Just payback for years of bad behavior."
— Renee Atword to Annalise Keating[src]

In court, Renee serves as the ADA against Annalise Keating's legal clinic who are defending Toby Solomon who is accused of negligent homicide. In court, Renee uses a forensic expert who combed through Toby's computer and introduced a selfie of Toby and the girl who later died because of him. She was passed out in the picture. Annalise argues to the judge that Renee purposely hid the image from Annalise. The Judge doesn't see it and allows the image. After court, Annalise visits her in her office where she commends Renee for using one of her own tactics, withholding something from evidence discovery until the last minute. Annalise asks what the District Attorney's Office is offering her client in exchange for a guilty plea. Renee refuses to negotiate with her, not just because of her client but because of a personal grudge she holds against Annalise for everything that she had done and shamed the department. Later, Annalise has Toby talk about another girl whom he heard was in a freezer elsewhere. Renee argues relevance to the case which Annalise later uses to tell the judge that Renee failed to offer a plea deal. After she was embarrassed in court, she offers Toby 3 years in prison in exchange for a guilty plea to involuntary manslaughter. ("Always Bet Black")

While walking to her car, Renee is stopped by an old friend, Nate Lahey. The two rekindle and the two do a little flirting before Nate asks her whether she was the individual responsible for turning evidence of Annalise Keating hitting her client over to the disciplinary board resulting in Annalise having her license to practice law revoked. This is the first that Renee is hearing about it and is a little surprised that no one from her office has informed her. The following day, Nate falls out with Annalise and runs to Renee which results in the two having passionate sex. Sometime later, Nate puts his phone down when Renee comes back into the bedroom and lies to her, telling her that it was just family drama. Renee wants to make things more public however Nate wants to keep what they've got between themselves for the time being. The conversation moves to Annalise coincidently where Renee mentions that Annalise is calling herself an alcoholic which will most likely get her her job back knowing Annalise she says. ("Don't Tell Annalise", "It's About Frank")

In one of her next cases, she is up against Annalise Keating, fighting to prosecute army veteran, Daniela Alvodar who is being charged with aggravated assault. Renne starts by questioning the victim on the stand, Jace Stone. She asks him about his recollection of events on the night in question and he tells her about when she held a knife to his throat and cut him. Annalise later tries her cross-examination but her questions cause upset and Renee constantly objects, forcing Annalise to retire so to speak. The next time in court, Annalise calls Dani to the stand where she gets her to open up about her time while on tour, about the time which gave her PTSD. The situation with Jace at her favorite bar reminded her of those events which are what caused her outburst. Annalise then receives evidence and asks the Judge to talk in her chambers. Inside. Annalise explains that Dani has just lied on the stand, that she was working a desk job, not in the feild as she says. Rennee calls this a ploy to get a mistrial which almost succeds. To prevent this, Renee offers Dani a reduced charge, a misdomeanor and required visitation to a rehab facility which Dani later agrees to. ("Is Someone Really Dead?") 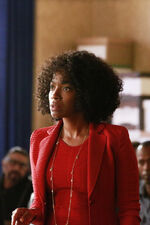 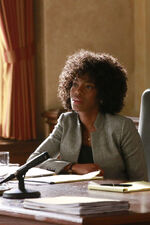 Retrieved from "https://howtogetawaywithmurder.fandom.com/wiki/Renee_Atwood?oldid=25785"
Community content is available under CC-BY-SA unless otherwise noted.