"Ask Him About Stella"

Chief of Staff to the President (formerly)

Olivia Pope is a minor character on How to Get Away with Murder and a main character on Scandal. She assisted Annalise with her class action lawsuit and managed to get it sent to the Supreme Court of the United States.

After being recommended by Michaela Pratt, Annalise Keating visits Olivia while she was giving a lecture in a college. ("Ask Him About Stella")

Annalise asks if Olivia could get her case fast-tracked to the Supreme Court. Olivia says no but Annalise leaves her the case file to look over. Olivia has drinks with Marcus and they talk about Annalise. Olivia goes home and looks through the case file. Afterward, she does some research on Annalise. Olivia goes to see Annalise and says that the problem with the case is Annalise herself. Because of her colorful past she can't be the face of this case. Olivia starts to leave but after having second thoughts, goes back to tell her they play by her rules. The following day, Olivia and Marcus go to see Fitz where they tell him about the case. Later, Marcus arrives to the meeting where he meets Michaela, Annalise's associate. Fitz, Annalise, and Olivia arrive shortly after where they discuss getting Justices on their side. Fitz tells them that President Grant said that she'd meet with them. At the Whitehouse, Mellie says that she likes the case but that the roster for the judges is bad and that if they go to court now they'll lose. After having a conversation without Annalise, Olivia realizes that they are getting help from the Whitehouse. Olivia wants to set up an interview and Annalise volunteers to go on camera. Olivia thinks that its a bad idea and Michaela suggests that they do the interview together. Before their interview, Olivia and Annalise go to the hairdresser. After, Olivia goes to see Quinn after learning that she is trying to get the case thrown out. She tells her that she's on the wrong side. Following, Olivia tells Fitz that she thinks that they aren't going to win the case, he reassures her. At the interview, Olivia's firing is mentioned, moreover, Annalise says that now is the time to make a change to the judicial system. After, Olivia and Annalise are having popcorn and wine when Marcus calls and tells them that Spivey won't be on their side so they won't hear the case. Olivia is packing up the case file when Quinn shows up at her door. She tells her about the dirt they had on Spivey and tells her that she'll back off. Olivia then goes to see Spivey and tells him that he doesn't have to worry about his secret anymore. Spivey then decides on his own to hear the case and they get the case sent to the supreme court. Annalise asks what is going to happen now. Olivia decides to join Annalise on the court trial. ("Allow Me To Reintroduce Myself")

Olivia and Annalise are practicing her arguments for the Supreme Court. A bottle of champagne shows up for Annalise courtesy of Fitz. The following day, Annalise goes over to the Supreme Court where she basks in the glory of the courtroom. Olivia is there with some good news the ACLU and NAACP want in on the case. But Annalise doesn’t want their help. Olivia urges her to accept assistance as losing the case will set back criminal justice reform by decades. All of this only serves to prompt Annalise to call her mother. Back at the hotel, Annalise's mother, Ophelia shows up at the apartment with Mac. Ophelia is excited to meet Olivia because she recognizes her from television. Nate also shows up to check on Annalise, but Olivia worries the court will use the fact that their face case is Annalise’s ex-boyfriend’s father to crucify her. At court the following day, Olivia receives a text from Marcus claiming that Egan was in bed with Justice Strickland. Olivia goes after the pizza guy, but before she can do that, Michaela calls – she found Annalise in a state. Olivia comes to talk Annalise into doing it, insisting she’s the only one who can argue the case. Annalise wants the one thing she can’t have – vodka. Olivia sends Michaela out to get some. Olivia gives Annalise the pep talk of her life. Michaela shows up with the vodka, however, Annalise rallies and maintains her sobriety. They go to enter the courtroom, but not before Ophelia has a dementia episode and spills coffee all over Olivia’s suit. In the bathroom, Ophelia is trying to help Olivia get cleaned up, Ophelia tells Olivia she takes care of everybody but herself. After cleaning up, Olivia and Ophelia join the courtroom to witness Annalise present her case. Following court, Egan and Annalise answer questions for the press. Annalise thanks Nate senior and Connor for helping her with the case, as well as the Grant Institute and Olivia Pope. That night, Olivia tells Annalise that the justices might vote in her favor. The two hug and part with mutual suggestions that they take better care of themselves. ("Lahey v. Commonwealth of Pennsylvania")

Following Annalise's case, the justices got back with their decision, that they have voted in favour of the case, resulting in better funding for public defenders as well as giving the plaintiffs of the case the change to get their case sent back to trial, this time with better representation due to some of them claiming to be innocent and only to be in prison because their public defenders represented them poorly due to them being overworked. The victory was announced on television where Olivia Pope was mentioned along with the Grant Institute. ("Nobody Else Is Dying") 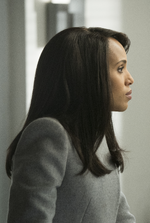 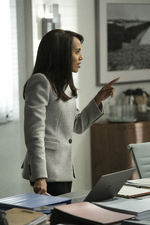 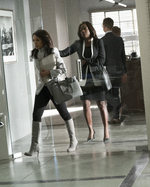 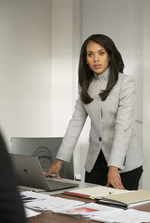 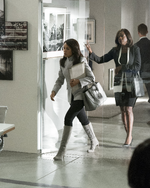 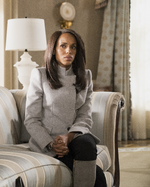 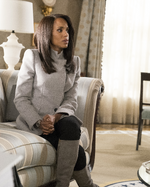 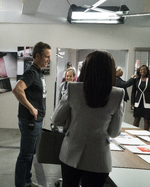 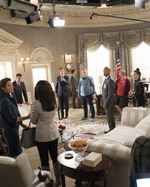 How to Get Away with MurderEdit 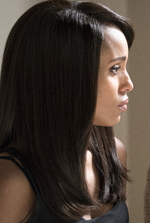 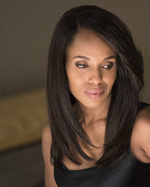 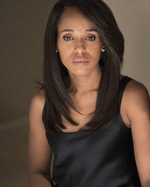 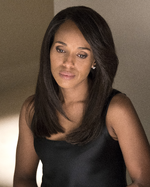 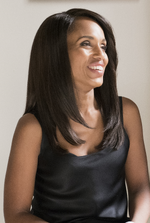 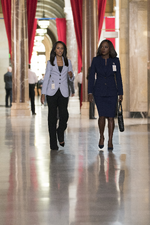 Retrieved from "https://howtogetawaywithmurder.fandom.com/wiki/Olivia_Pope?oldid=25238"
Community content is available under CC-BY-SA unless otherwise noted.