"Nobody Roots for Goliath"

"Nobody Roots for Goliath"[2] is the 52nd episode of How to Get Away with Murder.

When Annalise's resolve to certify her class action lawsuit is tested, a surprising ally comes to her aid. Meanwhile, Laurel and Michaela hit a roadblock after someone discovers their plans to take down Laurel's father.[2]

Isaac’s ex-wife, Jacqueline, told Annalise that they lost their daughter to suicide a few years ago and she suspected he was “using” again, because her “situation” was “triggering” him. As an addiction specialist herself, she said she could be her new counselor and help them both. Over his objections, Annalise later told Isaac they couldn’t continue their sessions, as they were getting “too close” and she wasn’t going to repeat what happened with Sam.

Annalise had a court hearing to get her lawsuit, with more than 70 plaintiffs, certified. The state attorney general tried to fight it by bringing up Annalise’s sobriety issues, including a recent photo of her holding a bottle of alcohol. She called it a set-up and a “witch hunt” and realized she was being put “on trial.” Connor suggested she take the stand, but Annalise wasn’t game. Instead, she went to ADA Denver, arguing that they have a common enemy in the attorney general and should team up to take him down.

Annalise later called a secretary in the D.A.’s office to the stand, and she testified that she placed the liquor bottle on Annalise’s car and took the photo to make Annalise look bad. Bonnie, who had words with Nate over the case, subsequently went to the A.G. offering her assistance in beating Annalise. Meanwhile, it was revealed Annalise and Jacqueline weren’t really going to have sessions together, but simply tell the Disciplinary Board they were. She encouraged to Annalise to really continue therapy with someone else, but refused to reveal more of Isaac’s issues, even though Annalise felt she wasn’t given the full picture.

At home afterward, Annalise found a bottle of vodka left in her kitchen, leading her to go to stay with Nate, who suspected the A.G. was behind it. He shamed her for having the secretary lie on the stand and said “playing dirty” was taking a “toll” on her. Both, it seemed, still had feelings for the other. The next day, Isaac showed up at court after being subpoenaed by the A.G. On the stand, he tried to get Isaac to say she wasn’t mentally competent to handle the lawsuit, as it could be a risk factor for her alcoholism. As he flashed back to some of their sessions, he lied, saying he wasn’t concerned about her sobriety. Nate confronted Bonnie afterward, accusing her of secretly seeing Isaac herself and bringing him to the A.G.’s attention. The stunt failed and the class-action suit was officially certified.

Amidst all this, Laurel ripped Asher for spying on her and Michaela but he in turn ripped them for keeping their investigation secret. He demanded they bring Frank into the loop, and he was furious when he was told. “This stops right here,” he demanded, insisting she was putting everyone’s life in danger, including her baby’s. Laurel refused to “bail on this,” arguing she wasn’t “crazy” but “right” for wanting her dad to go prison for the crimes he committed. She also said that if Frank really loved her, as he claims, he’d help. That got him on board.

Michaela still wanted to keep the investigation a secret from Connor, over Oliver’s objections. Tegan asked her to plan an office party in anticipation of Laurel’s dad’s company going public and her involvement in the deal. Michaela then suggested to Laurel and co. that they use the party as the time to seize the documents they needed to leak. Asher was still against the whole thing, and refused to keep quiet. “I don’t have to do anything. I’m no one’s bitch,” he declared. And, feeling like he was “second choice” to both Laurel and the kind of man she really wanted, he told Michaela they should “call it” on their relationship, leaving her devastated.

Towards the end of the episode, Asher told the group that he was “in” to do justice for Wes, but hadn’t forgiven Michaela. She still refused to use Tegan’s key card, but Oliver suggested they do take it but blame it on fellow intern Simon, who was in the U.S. on DACA authorization. Laurel and Frank took a DNA sample from him for a paternity test, Michael showed Asher she loved him by pouring ketchup over her old $20,000 wedding dress, and Oliver and Connor celebrated his successful involvement in Annalise’s lawsuit. Connor credited Oliver with his happiness and proposed with a twisty-tie from their loaf of bread. His response: “I’m sorry. I’ve been lying to you. We know who killed Wes.”

In the final minutes, Annalise confronted Isaac over his perjury, but he denied it, prompting her to ask if he was using heroin. She cried that she was still hurting people and demanded to know the truth: “Am I triggering you?” He insisted she wasn’t, and wondered if Bonnie suggested that. “It’s not Bonnie. It’s your ex-wife,” she confessed.

Forty-eight hours later, someone was in emergency surgery and flatlined. Next week, the winter finale will finally reveal “what happened that night.” 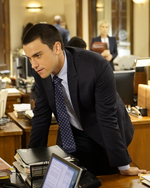 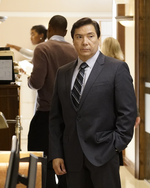 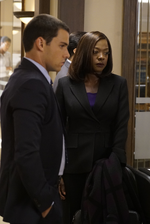 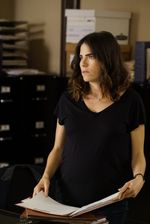 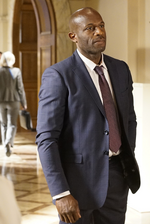 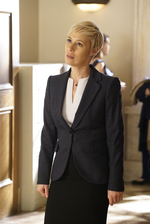 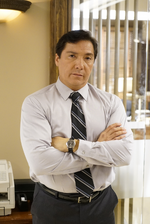 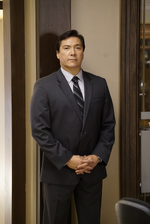 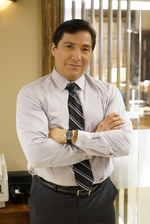 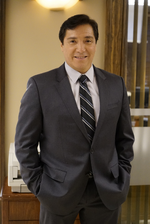 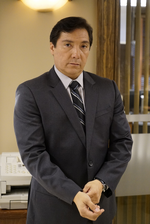 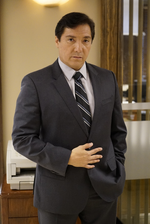 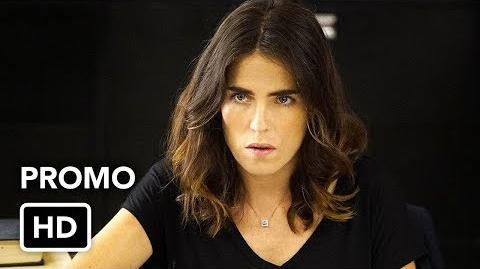 Retrieved from "https://howtogetawaywithmurder.fandom.com/wiki/Nobody_Roots_for_Goliath?oldid=25904"
Community content is available under CC-BY-SA unless otherwise noted.