Strangled by Frank on Sam's orders
"It's All My Fault"

Lila Stangard is a recurring character on How to Get Away with Murder. Lila was the girlfriend of Griffin O'Reilly and the friend of Rebecca Sutter. She was having an affair with Sam Keating and was killed at his command.

Lila Stangard was born to Stuart and Miranda Stangard. She didn't grow up religious, so her family was shocked when she started dating Griffin O'Reilly and took a virginity pact with him. She was having an affair with Sam Keating. ("Pilot", "The Night Lila Died")

Around June 2014, Lila and Rebecca talk about her Lila's virginity and how she lost it to her friend. Rebecca asks if Griffin finally wanted to have sex with her, and she replies that he is not Griffin and that he met a new man: "Mr. Darcy." Rebecca asks her what his name is and Lila tells her that she promised not to tell anyone, but that he has a wife. Rebecca arrives on the roof of the Kappa Kappa Theta building, where she meets Lila to use drugs, and Lila tells her that she finally did it, had sex with Mr. Darcy, and tells her about her first time, but asks her not to tell anyone, Then Rebecca replies that she does not want anyone to know that they are friends. Lila receives a message, and when she checks it is a photo that Sam sent her, a photo of Sam, nude. Rebecca and Lila laugh and keep talking. ("Let's Get to Scooping", "He Has a Wife")

Almost two months later, Rebecca arrives on the roof with Lila again, who had apparently called her and seems to be very emotional, since she is crying. Rebecca asks what happened, and Lila tells her that Mr. Darcy wants to end their relationship. Lila feels very bad and then Rebecca tries to comfort her. Lila asks Rebecca if she wants to show his wife the pictures that Sam sent to her, and she says no. In addition, Lila says that bad things happen when they have sex (indicating that she is pregnant) and says that she is going to stay with Griffin, but Rebecca tries to convince her not to. Sometime later, Lila talks to Sam about her baby and tells him that she wants to keep it. Since Sam does not want to leave Annalise, he probably manages to convince Lila to go to a clinic to get an abortion. Lila talks to the only person she can trust, Rebecca, and asks about clinics to assist with Sam, but once there, Lila decides not to abort the baby. This bothers Sam the two later argue. ("Hello, Raskolnikov", "The Night Lila Died")

On August 29, 2014, Rebecca and Lila are in Rebecca's apartment and Lila is telling her that she cannot keep seeing her and doing the drugs. The two argue and hurts Rebecca's feelings and she runs from her house. Lila then calls Sam. She tells him that she has tried to have sex with Griffin to make him believe the baby was his, but Griffin did not want to have sex. Sam tells her to calm down, but Lila tells him that she is going to tell Annalise everything and hangs up. She then goes to the Keating House where Bonnie answers. Bonnie asks if she needs a lawyer, unaware of what her visit is about. Lila, however, tells her that she needs to talk about Sam with Annalize, and Bonnie, to protect him, tells her to go or she will call the police, Lila leaves, but warns her to tell Sam that she can not hide him anymore. Returning to the fraternity, Lila walks in on Rebecca having sex with Griffin. Rebecca tells Lila that she did it to prove that Griffin does not deserve it, and Lila, very annoying, leaps against both of them and scratches them. Griffin separates Lila from Rebecca, and Lila is furious as she tells them that she does not want to see either of them again. Griffin turns to see Rebecca and sees her smiling while discovering that everything was a trap that Rebecca handed him. Sam calls Lila and she tells him that she found Griffin having sex with Rebecca. Lila hangs up when she starts to hear screams: It's Griffin, who is looking for explanations but Lila is hiding in the water tank. ("The Night Lila Died")

While Griffin is leaving. Sam comes to the roof and talks to Lila; she gets down and Sam asks if she told Annalise. Lila tells him that she only said that to get him to come because she knows that all she cares about is Annalise. Sam tells her that it is not true, but Lila tells him that every time he told her that he loved her was a lie. Sam tells Lila that he no longer loves Annalize and that he loves her. Sam kisses Lila passionately and tells her that he has to go because he needs to tell Annalise. Soon after, Sam makes a call to Frank asking him to do him a favor. Lila is soon surprised as Frank from behind throws her to the ground and begins to choke her to kill her. Frank raises Lila's dead body and deposits in the water tank out of the way. Rebecca soon arrives on the roof looking for Lila. Rebecca decides to give up and leaves, but Lila's phone starts ringing on the floor and she approaches to take it. As her phone was on the floor supposes that Lila is in the tank. Rebecca climbs the stairs to meet Lila inside, but when she reaches the top she sees that the water tank is closed, and she also sees blond hair. When she opens the container, she finds Lila's corpse and becomes frightened as she tries to get her out of the water. That's when some girls arrive and Rebecca got frightened and she didn't want the girls to think she did it so she decided to hide in the water tank as well. ("The Night Lila Died", "It's All My Fault")

Her body was later discovered and after an autopsy was performed, it was publically released what she was murdered via strangulation and then placed in the water tank postmortem. Through vigorous detective work, the detectives on the case eventually charged Rebecca Sutter for her murder giving as the evidence at the time pointed to Rebecca being the killer. However, another piece of evidence was released from Lila's phone which has a picture of Mr. Darcey's penis. This then moved the investigation towards Mr. Darcey and Rebecca was eventually released. ("Pilot", "We're Not Friends") 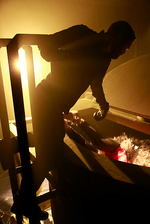 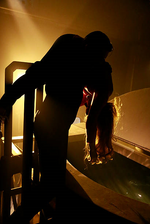 Retrieved from "https://howtogetawaywithmurder.fandom.com/wiki/Lila_Stangard?oldid=25047"
Community content is available under CC-BY-SA unless otherwise noted.