"Have you seen me? In what world would anyone believe Chad would even look at me? But he did."
—Jolene Samuels to Bonnie Winterbottom[src]

Jolene Samuels is a minor character on How to Get Away with Murder. She was accused of raping her patient after his surgery.

"I would turn my bedroom into an I. C. U., make my little brothers pretend to be trauma victims. The idea of helping people just always made me feel better about myself, which is why this is so hard. I mean, doctors can kill a patient and keep their jobs, but for a nurse, we don't get off so easy. And I get it Why people would think I did this. I'm not the prettiest girl in the room, but this will ruin me. I'll be forced onto some sexual-predator registry. But I didn't do what that man says, I promise you. I didn't rape him."
—Jolene Samuels to Annalise Keating's Law Office[src]

After having a sexual relationship with her patient, Chad Manning, at Middleton Hospital, Jolene was accused of raping him. She, therefore, sought out an attorney and arrived at Annalise Keating's Law Office for her assistance. As she was indisposed, her associate, Bonnie Winterbottom, took on her case. She tells the team her story before court. Prosecutor Amanda Winthrop gives her opening statement first and Bonnie follows. The prosecution calls their first witness to the stand, Annabelle Grimes, a doctor who examined Chad after the sexual encounter and found bruises on his testicles. Bonnie then asks the witness whether the pills that Chad was on could have caused the bruises to which the doctor agrees. The next witness claims to have seen the abuse personally, however, Bonnie manages to get his testimony thrown out after bringing up the fact that he suffers from memory loss. The prosecutor then brought Mr. Fowler to the stand where he testified to having found a questionable website on Jolene's search history where its users talk about their illegal sexual encounters. He then reads out Jolene's entry to which it describes her sexual encounter with Chad. Bonnie then takes Jolene into a private room to remind her that if she lies to her, she cannot acquit her of the charges. After finding additional evidence, Bonnie puts Chad on the stand and questions why he hasn't told the court that he's gay. The judge finds her questioning unusual and tells the jury to disregard Chad's statement. After accepting a plea deal from the prosecutor, Bonnie tricks the hospital's lawyer into an indirect confession as she proves that Chad and the lawyer are colluding which subsequently pressures the prosecutor to dismiss the case against Jolene. ("Mama's Here Now") 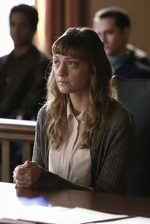 Retrieved from "https://howtogetawaywithmurder.fandom.com/wiki/Jolene_Samuels?oldid=27056"
Community content is available under CC-BY-SA unless otherwise noted.