"It's All Her Fault"

"It's All Her Fault" is the 2nd episode of How to Get Away with Murder.

Annalise takes on a new client, Max St. Vincent, an eccentric millionaire who is the key suspect in his wife's brutal murder. All the clues point to St. Vincent as the killer, but Annalise challenges her students to prove he's innocent – whether that's the truth or not. Meanwhile, Annalise deals with issues in her own home when her growing suspicions that Sam is somehow involved in Lila's disappearance start to affect their marriage. In flash forwards, we go back to the night of the murder and learn that Wes might be hiding a few secrets of his own.[2]

Two months and three weeks ago: Annalise reads a newspaper article posing a question about Lila Stangard's death. Was it an accident or was it murder? In class, Annalise lets her students know that she doesn't care to know if her clients are guilty or innocent. That's because everyone lies, so everyone is unknowable. For example, Marjorie St. Vincent may have been taken by surprise by someone she knew when she was stabbed 16 times in the master bedroom of her mansion. The alleged killer: Max St. Vincent - her husband.

Max shows Annalise and her team the room where his wife of 20 years was killed. The crime scene has been preserved so the students can view it with a fresh set of eyes. Max uses Connor to play the role of his dead wife so he can act out how he murdered his wife according to the prosecution. He has the moves for sure. Max said there were three cops at the scene, but only two were listed on the report. Annalise sends Wes to the police department to retrieve the supplemental arrest record. The clerk believes he’s with the DA's office, so she turns it over to him no questions asked.

Wes's neighbor, Rebecca, swings by at three in the morning to use his shower. It's cool. Wes was up. He can't help gazing at her as she undresses before heading behind the door. The next morning, Wes sees on the news that Lila Stangard's death has been ruled a homicide. He recognizes the photo of her boyfriend, Griffin O'Reilly, as being the same guy who rushed out of Rebecca's apartment not too long ago. Wes has no time to digest this, as he turns over the arrest report. Annalise effectively uses it to discredit the cop who bogusly claimed to have found the hunting knife that was used as the murder weapon.

Connor uses his "Booty Call IT Guy" to get info to discredit Marjorie's best friend, who would likely testify that Max killed his wife to avoid a divorce. Frank takes Michaela and Asher with him to help him find a witness to corroborate his alibi. Thanks to a little blackmail, the mission is accomplished. Max's daughter, Eloise, comes in from Stanford to be a character witness for her dad. She's prepped hard by the team, but is unprepared for the prosecution's claim that Max's first wife, her mother, was killed in Switzerland back when he went by the name Stuart Sims. The murder weapon: a hunting knife.

Annalise assures Max that if he lies to her again he no longer has an attorney. At home, she checks Sam's phone for messages from Lila Stangard. She finds an innocent one. She flat-out asks Sam if he slept with his student. It's happened before. Sam assures Annalise that there was nothing going on between him and Lila. They kiss and make up. Then it's back to work. Even if Max did kill his first wife, the team's only concern is proving that he didn't kill the second one. Laurel has an idea of how to do just that. After all, Max is a hunter. He knows how to kill. Yet the crime scene suggests that the murderer does not.

Annalise has Max demonstrate how to kill an animal humanely. He used this method to kill his first wife. An expert confirms that Max's first wife was murdered by someone who knew a lot about anatomy. The slayer of his second wife did not. There's no way these two women were killed by the same person. Wes takes note of Eloise during this testimony. He believes she's the killer, exacting revenge to frame her dad after she found out he killed her mom. He has no idea that Frank had already presented this likelihood to Annalise. None of that matters now. The case has gone to the jury. Max St. Vincent is found not guilty.

In random updates, Nate warns Annalise to be careful about embarrassing cops on the stand. He also assures her that the two of them are done. He threatens to tell Sam about the two of them if she ever calls him again. Rebecca tells Wes that she was not Lila Stangard's friend. Connor makes up with Booty Call IT Guy by buying him takeout after initially blowing off their dinner date.

In a flash-forward, we see that Wes lied about the coin toss to make sure that the group went back to get the dead body. He's the one who purchases the lighter fluid used to set the body ablaze. He buys a burner phone while in the store. He makes a call, assuring whoever is on the other end of the line that he convinced the others to help take care of the problem. Wes vows that they will protect this yet-to-be-revealed person.

Annalise checks Sam's phone again. She finds that the innocent message she saw before has been deleted. She heads out to see Nate. She tells him that Sam and Lila were close. He may have had something to do with her murder. Annalise needs Nate to check out her husband's alibi. He agrees to do so just before warning her to be careful. When Annalise returns home, she makes passionate love to Sam. The tears running down her face after they are done suggests she did this simply so he wouldn't know she's suspicious.

Wes returns home to his apartment to find Rebecca being arrested. He tells her to not say anything. Wes sees on the news that Griffin O'Reilly has also been arrested. The two of them are suspects in the murder of Lila Stangard. Rebecca has a history of drug charges. Wes realizes she hid something in his bathroom the night she came in to shower. It's a cell phone.

In a flash forward, we once again see Wes making the call vowing to protect someone. This person is staying in Room 203 of a hotel. The identity of the subject he's been calling is revealed. It's Rebecca. Wes promises that he won't leave her again. He kisses her, promising that she's safe. 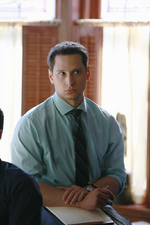 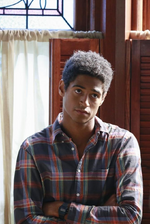 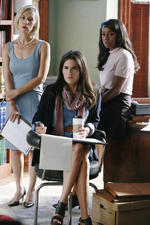 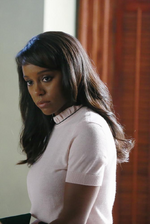 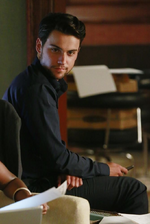 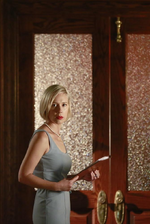 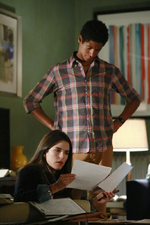 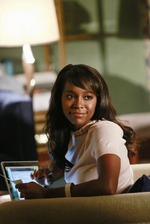 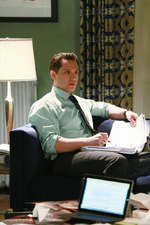 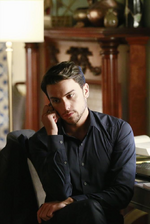 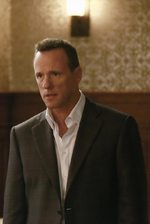 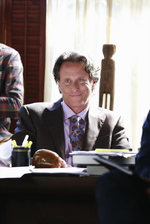 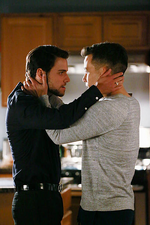 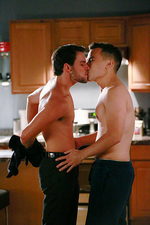 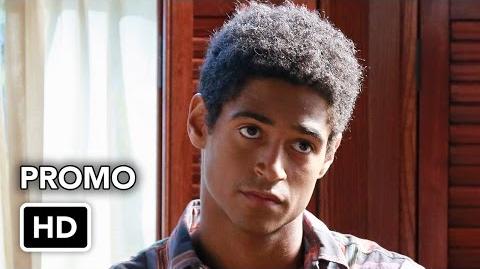 Retrieved from "https://howtogetawaywithmurder.fandom.com/wiki/It%27s_All_Her_Fault?oldid=25055"
Community content is available under CC-BY-SA unless otherwise noted.