"There Are Worse Things Than Murder"

"I sat with that hammer for hours, and when he came home, I stood up, and I hit him over and over again until I saw brains. And still I didn't feel... that that made up for all the times that he hit me. So I hit him some more. You want me to say I'm sorry, that I regret my actions. But I don't. How can I when it's the one decision that finally set me free?"
—Irene Crowley[src]

Irene Crowley is a character who served a 32-year prison sentence for the murder of her husband Rodney Crowley. After 6 attempts to go on probation, the government assigns Irene to the pro-bono clinic that is run by Annalise Keating.

In the 70s, Irene met her husband Rodney Crowley in a bar, and after a short time she became pregnant with Rodney and both decide to get married. Irene would have a baby, however, due to the abuse she received from Rodney she was admitted to the hospital with a broken wrist and had a miscarriage. In 1983, after years of mistreatment on the part of her husband came a moment in which Irene took a hammer and hid in a room where she waited for her husband to come home. Once he came home, she jumped him and hit him repeatedly with the hammer. After feeling that what she had done to him wasn't enough, she hit him again and again. Because her shift at the factory where she was working was about to begin, Irene takes a shower and goes to work, leaving the crime scene intact. Amber Crowley, Rodney's sister, arrives at her brother's house and finds him in a pool of blood. The police arrest Irene and she is sentenced to prison. At that time they could not argue domestic abuse. Just over 30 years later, Irene tries on multiple occasions to get parole, but they never give it. ("There Are Worse Things Than Murder")

The government assigns the case to Annalise Keating's Pro-bono Clinic, and she introduces all of her students with an idea to represent her; Irene chooses Connor Walsh and represents her after she has individual interviews with the students. Connor tries to make Irene talk about the abuse that she suffered when her husband was alive but she won't talk until he tells her that he also killed someone and understands it, but he can only leave if she tells the truth. Finally, Irene talks to the jury and tells them everything, which leads Annalize to talk to Amber, and asks her to help her free Irene, since she is sure that Rodney also abused her. The jury finally makes a decision and grants Irene parole. ("There Are Worse Things Than Murder") 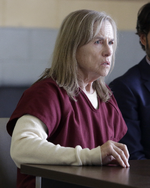 Retrieved from "https://howtogetawaywithmurder.fandom.com/wiki/Irene_Crowley?oldid=24073"
Community content is available under CC-BY-SA unless otherwise noted.