"Hi, I'm Philip" is the 23rd episode of How to Get Away with Murder.

Philip makes a threatening move and ADA Sinclair may have figured out a way to take down Annalise. Meanwhile, Catherine and Caleb are forced to make a life changing decision.[2]

Laurel yells at Michaela and Connor for not noticing something as they enter the house and Connor responds with asking how Laurel and Wes are both okay with something. Bonnie comes and asks Connor if "this" was his idea and tells him to "get on board" with the plan and he agrees. Bonnie takes the gun from Wes and the camera flashes to the bleeding bodies.

Bonnie sits in the shower and remembers her argument with Annalise over Annalise's decision to tell Asher about Bonnie's childhood. Bonnie's phone rings when Asher calls her and she ignores it, remembering her statement to Annalise: that she wanted Annalise to die.

Annalise is remembering the same scene as she fixes her hair at night. She takes a photo of herself smiling and sends a text to her mother. Nate texts her that she's outside.

Nate is standing outside her door when she opens it, and says that everything is fine. Annalise invites him in and he agrees. They sit in silence.

Frank, Laurel, Connor, and Michaela are driving back. Frank and Laurel argue about Laurel telling Annalise about their plan. Frank accuses Laurel of being classist.

Nate realizes that he's making Annalise nervous and she says it is because he more about her than most do. He tells her it's sad she says so because he doesn't know her at all.

Laurel and Frank continue arguing and Frank accuses her of acting like a princess because she grew up around money. He drops off Connor at his place.

Nate reminds Annalise that she plays people and she argues that everyone does. He tells her that she does more than most and that no one else would get away with what she did to him. He tells her that he should kill her or make her life awful but instead he just came to her house. He tells her that he's a mess and she tells him that he needs to decide whether or not he forgives her because she wasn't going to have sex with him as payment. She gets him a blanket and tells him to sleep on her couch because he is too drunk to drive.

Connor arrives at the door to his apartment and notices that it is open. He calls for Oliver but finds that the apartment is empty and the fridge is still open and the milk carton still on the ground, with the milk all over the floor. He rushes to Annalise's house and tells her that Oliver is missing.

Annalise gathers everyone at her house. Connor is freaking out about Oliver being missing, and everyone tries to tell him that Oliver is probably fine. Nate remains in the house because he says that he is already involved. Annalise tells Connor to calm down to help Oliver, but Connor remains angry and tells Annalise that if anything happens to Oliver, it is her fault. Laurel tells the group that they can't go to the police because hacking Philip was already illegal activity, and Sinclair is constantly trying to make them lose. They all begin arguing over one another until Annalise stops them and orders them to call it in to the police. They begin to argue with her, but she tells them that they'll find a way out as always. Nate begins to call it in, but Oliver and Philip suddenly steps out behind them.

Oliver explains that Philip stopped by and Oliver attempted to explain what was happening and, in the end, decided to go to the Keating house. Philip explains that he had a hacker alert set up for World of Warcraft and that his birth parents are from Iowa and he is not related to the Hapstolls. Annalise takes the blame for illegal actions against Philip and Philip says that he is going to go to the cops or sue Annalise. She asks him what he wants and he says that he doesn't know yet.

Annalise explains their actions to Nate and bars Frank from tailing Philip. Nate decides to tail him instead.

Michaela looks at the chair to see if Philip left any hair behind to prove his connection to the Hapstolls, and the others also start to look but Oliver pulls out straws that Philip used to drink Coke and the Soup Palace.

The next day, the group is inundated with papers from Sinclair related to the Hapstoll case. Frank is sent to run the DNA test with the straws with Asher, and Annalise pulls Laurel aside to do Bonnie's work while Bonnie is absent. Connor destroys Oliver's laptop to remove the evidence of his hacking while Nate continues to tail Philip. Caleb calls Michaela insistently and he and Catherine are told to come to the house to be updated on the case and about Philip. Caleb is angry that the team made another mistake, and, in the middle of the conversation, Sinclair calls to meet about a plea deal. Although Catherine does not wish to take the deal, Caleb decides to consider it and Annalise sends Michaela to distract him. Asher asks Annalise about Bonnie and is told to give her space. Catherine calls to ask to talk to Wes.

Both Michaela and Wes talk to Caleb and Catherine, respectively, about the plea deal. Michaela tells Caleb that he should trust Annalise while Wes tells Catherine that she should take the deal. When Annalise confronts him, Wes explains that he wishes he had turned himself in when he killed Sam. Instead, the murder weighs on and affects all of them. Annalise tells him that she protects him as he protected Rebecca. Later, when Frank talks to his contact about the DNA sample, his contact tells him that Sinclair sent a lot of evidence to the lab to by analyzed that very morning, and Asher realizes that she probably planted a wiretap in the house when she sent new evidence the day before. Annalise orders the entire house to scour the evidence files.

Catherine calls and tells Annalise that she needs to come to the house immediately. Caleb has called Sinclair and negotiated (and accepted) a plea deal in which he'll be in jail for thirty years while Catherine has none. Michaela and Annalise try to convince him to change his mind but he refuses.

Back at the house, Connor is still writing notes on his pad and Asher realizes that the wiretap is in the pen that came with the evidence files. He does a victory dance and Frank takes the pen apart to expose the bug. Annalise decides it to mislead Sinclair into believing that Caleb hid the gun from the murder in a toolbox in the basement and that Annalise advised him to take the plea deal. His so-called motive is that he was sleeping with Catherine and their parents threatened it to reveal it to the public. Caleb then snapped and killed his parents, and they cannot hide the gun now because Catherine threatened to go to the police.

Sinclair brings the police to the house with a warrant to search the house. Annalise tells her that she is violating the Fourth Amendment, and the police find no murder weapon. Nate calls to tell Annalise that Philip is giving his statement to the police. He tells her that he can fix it. He pulls up the file of a schizophrenic arrestee, labeled as delusional, and replaces his name with Philip's. The police see the files and although they decide to check it out, it is not a top priority.

Caleb calls to tell them that Catherine has decided to negotiate a deal with Sinclair. The house gathers to find a way to have the plea deal rejected but come up with nothing before the hearing starts. Annalist attempts to stall and, at the last moment, Frank comes in the the DNA results. Annalise shows them to Catherine and Catherine rejects the deal.

Annalise goes to Sinclair's office to show her the DNA results. She is talking on the phone frantically to someone. Philip's DNA is a 99.4% match to that found at the crime scene and he is also shown to be the incestuous child of Helena and Grant Hapstoll.

There is then a montage of the various couples, and Wes, alone. Frank is shown to be making dinner for Laurel. Connor takes Oliver to the Criminal Law classroom. Wes receives a painting from Catherine of himself and his parents. Michaela goes to the Hapstoll house to talk Caleb about their relationship and kisses him. Nate comes to Annalise's house and delivers the news that Sinclair told the police about Philip and, when he turns to leave, Annalise asks why he's helping her. He explains that he is angry about Sinclair, and then kisses her. Each couple is shown intimately, but Wes is shown to focus on the painting. He rushes to Annalise's house to ask about photographs. Caleb tells Michaela he has something to tell her.

Caleb takes Michaela into Catherine's painting room. He removes the vent and shows her a gun that he says he found last week. In the photograph of Philip, Wes shows Annalise that Philip also has one of Catherine's paintings. He wonders whether Catherine killed their parents. Catherine is shown in a car and joined by Philip, and he tells her that he will take care of the situation. 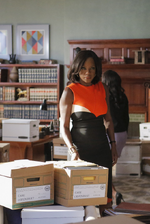 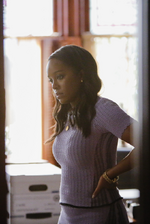 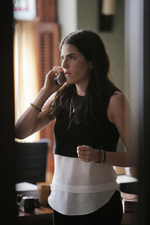 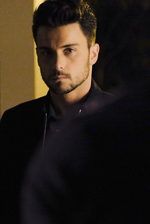 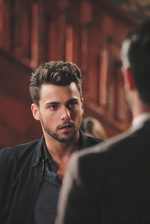 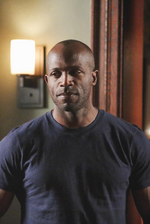 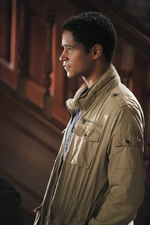 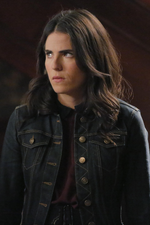 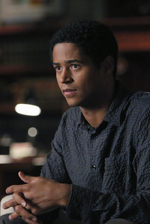 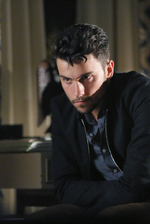 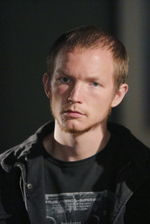 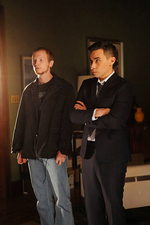 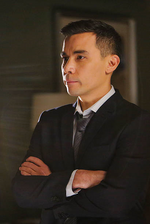 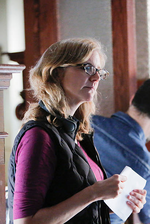 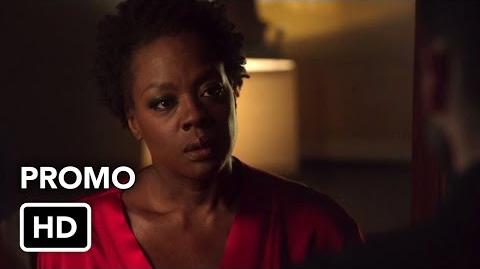 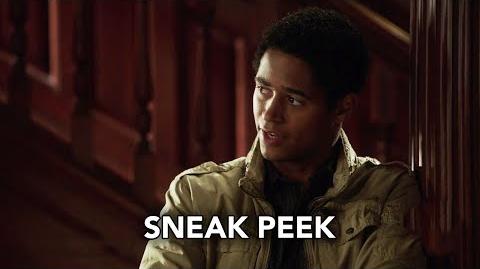 Retrieved from "https://howtogetawaywithmurder.fandom.com/wiki/Hi,_I%27m_Philip?oldid=22554"
Community content is available under CC-BY-SA unless otherwise noted.