Throat slit by Caleb Hapstall
"It's Time to Move On"

"I told Grant, do not bring those mongrels into your home! They'll turn on you. And they did they killed him and Ursula. No, you can't trust people like that those orientals, those mulattos! [...] It's in their nature!"
—Helena Hapstall to the police[src]

Helena Hapstall is a minor character on How to Get Away with Murder. She is the sister to Grant Hapstall who was allegedly murdered by Caleb Hapstall and his sister Catherine Hapstall.

"Are you listening to me?! I am telling you those two murdered my brother and his wife!"
"How do you know that? Did you hear anything last night?" [...]
"I don't know. I just [...] I just I'm not sure I heard anything. I was just so tired."
—Helena Hapstall to the police the morning after the Hapstall murder.[src]

Helena was the sister to Grant Hapstall, whom although they were blood-related, had a sexual relationship with each other. Helena eventually had a son, Philip Jessup who she put up for adoption to hide the fact that he was born out of incest. On the night of November 4, Helena was in the guest house at the Hapstall Mansion while her house was being renovated when she heard screaming coming from the mansion. The following morning, it was revealed that both Grant and Ursula Hapstall were murdered and Helena instantly accused Caleb and Catherine Hapstall because of the night before. The police questioned Helena outside the mansion where she was erratic, saying various things about Caleb and Catherine, some racist. ("It's Time to Move On", "Meet Bonnie", "Hi, I'm Philip")

During the trial against Caleb and Catherine Hapstall, the prosecutor asked Helena about what she witnessed on the night of her brother and sister-in-law's murder. She explains that she heard screaming and went to the window to see what was going on at the mansion. She claimed to have seen both Caleb and Catherine running past the window. The prosecutor then gave Helena over to the defendant's attorney who then introduced some surveillance footage into evidence which showed Helena at a spa during the murder meaning that she couldn't have seen the murder as she wasn't there. The prosecutor later introduces further evidence to disprove the defendants one as the new footage proves that Helena was at the spa during 2013, not at the time of the murder. The judge then called both attorneys to her office. The Hapstalls then fired their attorney and hired Annalise Keating. While in her car a couple of days later, Helena was murdered by Caleb Hapstall, presumably to prevent her for further testifying against him and his sister in open court. Not long after her death, the police footage of Helena giving her statement to the police is later used by Annalise to get her testimony thrown out. It was eventually revealed to the public months later that Caleb was the one who murdered his parents and Helena. ("It's Time to Move On", "Meet Bonnie", "Anna Mae") 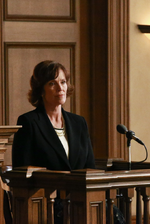 Retrieved from "https://howtogetawaywithmurder.fandom.com/wiki/Helena_Hapstall?oldid=21887"
Community content is available under CC-BY-SA unless otherwise noted.