S1 - S2 - S3 - S4 - S5 - S6
Griffin O'Reilly is a minor character on How to Get Away with Murder. He is the captain of the football team, and boyfriend of the recently deceased Lila Stangard. He was part of the sorority Sigma Tau Pi.

Griffin was possibly raised religious, as he has supposedly made a virginity pact and is waiting for marriage. At some point, Griffin entered a relationship with a woman named Lila Stangard.

Following Lila's disappearance, Griffin stops by Rebecca's apartment. The two argue as Wes arrives back at his apartment. He witnesses Griffin storming out, leaving Rebecca in tears. Wes notices stuff knocked on the floor, and offers to help his neighbor pick things up. She refuses, slamming the door in his face. Later on, Bonnie and Frank watch the news as it reports the disappearance of Lila Stangard. They watch Griffin's interview, but shut it off when Annalise and Sam arrive. The following night, at a sorority house, maintenance is called due to slow running water. The maintenance worker heads out to check the water tank where he discovers Lila Stangard's floating corpse. The police are called, and this is broadcast live on the news. Griffin rushes over to Rebecca's apartment and rushes her over to the TV. They watch the discovery, realizing the girl to be Lila. Meanwhile, Sam and Annalise watch this on the news; Annalise comments that she thinks the boyfriend killed her, referring to Griffin. ("Pilot")

It's revealed that Griffin didn't kill Lila. The night Lila died, he got drunk and did drugs with Rebecca at his fraternity, and they went to his room together. Rebecca texted Lila from Griffin's phone, telling her to come over, in order to prove that Griffin isn't the guy Lila thinks he is. Lila comes, sees them naked and kissing, and runs out. ("It's All My Fault") 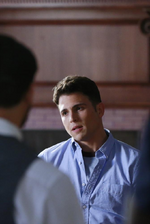 Retrieved from "https://howtogetawaywithmurder.fandom.com/wiki/Griffin_O%27Reilly?oldid=21639"
Community content is available under CC-BY-SA unless otherwise noted.