Gina Sadowski is a minor character on How to Get Away with Murder. She is a woman Annalise Keating represented when she was charged with the attempted murder on her former boss and lover, Arthur Kaufman. However, she may not have been as innocent as she let on to be.

Gina Sadowski worked as the second assistant for Arthur Kaufman, the CEO of an advertising agency and a married man. Soon after working at the agency, an affair began between her and Arthur. Eventually, Agnes Kaufman, Arthur's wife, finds out about the affair, so he ended his relationship with Gina and transferred her to the accounting department. After Arthur suffers an allergic reaction to Aspirin and is left severely handicapped, only saved by his assistant Linda Tanner, Gina is charged with attempted murder, believed to have switched his sleeping pills out for Aspirin. ("Pilot") 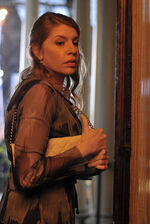 Retrieved from "https://howtogetawaywithmurder.fandom.com/wiki/Gina_Sadowski?oldid=19222"
Community content is available under CC-BY-SA unless otherwise noted.