Heart attack (disputed)
"Please Say No One Else Is Dead"

Emmett Crawford was a main character on How to Get Away with Murder. He was a partner at Caplan & Gold who offered Annalise Keating a job at the firm, which she later accepted.

"Do you know what Emmett did in London?"
"All I heard was 'misconduct'."
"Sexual?"
"I don't know. I don't want to either. Take it from me, the lesser you know around here the better."
—Annalise Keating and Tegan Price regarding Emmett's past.[src]

While Emmett was in London, he fell in love with one of his clients, Nora. As a result, rumors of misconduct arose across Caplan & Gold's staff. He was later promoted to managing partner of Caplan & Gold, Emmett made it his mission to make sure that the firm wouldn't receive any further setbacks such as the one from Jorge Castillo. One of the big changes he had to make was to move to the US from London to deal with the Jorge mess. ("Your Funeral", "The Baby Was Never Dead", "Be the Martyr")

"It's official. Anything else?"
"Just the part where you prove the rest of my partners wrong."
"Excuse me?"
"I was the sole partner who believed in this deal. Don't embarrass me."
—Annalise Keating and Emmett Crawford about her job[src]

Emmett also recommended a partner position to the board for Annalise Keating. During the interview with Annalise, Emmett introduces himself and makes a comment about him thinking that she would be taller. He asks Tegan Price to show them to one of the conference rooms. Emmett informs Annalise that he is from the London branch of Caplan & Gold meaning that he doesn't know where everything is located yet. At the interview with some of the other partners, Emmett gives Annalise the talk about what he and his firm are willing to offer her. Annalise makes a comment on her salary which she mocks and tells them that she has been offered double the amount from other offers from other law firms. Annalise then asks about whether she will be able to hire her own team for the class action retrials. Emmett tells her that he will allow it and asks her to give it a few days to think about it. Annalise stops him and tells him that she doesn't think that it is a good fit for her at the firm due to how desperate they are.

A couple of days later, Annalise returned to Caplan & Gold and offered them the chance to repair their reputation by being a funder in her Legal Clinic along with the university. Willing to negotiate, he tells Annalise that she will have to compromise on some of her demands, however, Annalise refuses to negotiate any further and leaves. Not long later, he and the partners decide to call Annalise, offering her the job. He later gives Annalise her office and tells her to prove the other partners wrong as he was the only partner who believed in her. ("Your Funeral")

In the episode ("Where Are Your Parents?"), Governor Lynne Birkhead places suspicion that Emmett Crawford had Nathaniel Lahey, Sr. killed during his transfer. After attending Annalise Keating's Christmas dinner, he shares an awkward moment with her in the fact he seems to try and kiss her. Tegan encourages Annalise to go on a date with Emmett to see if she can determine whether Emmett had a hand in the death of Nate Senior. Both women believe him to be guilty, and Emmett is later arrested. Once Annalise and Tegan determine that their information is wrong, Tegan turns over additional information to the FBI implicating the Castillos in a number of crimes she'd not originally disclosed. She also identifies herself as Jane Doe, to Emmett's surprise.

When asked why the Castillos would target a man like him, Emmett informs the FBI that he is running for District Attorney. Unlike past DA's (such as Todd Denver), Emmett is a man of integrity who cannot be bought. The FBI releases Emmett, and the two of them return to C&G for a celebratory drink. Emmett offers Tegan a glass of scotch, but Tegan (an established gin drinker) declines, telling Emmett not to start until she returns with her drink of choice.

While Tegan is gone, Birkhead declares herself vindicated of all accusations and publicly accuses Emmett of being a part of Nate Senior's murder. Terrified for her own safety, Tegan calls Annalise to inform her of the governor's announcement and asks if she can sleep at Annalise's house. Meanwhile, Emmett lies upstairs choking to death. ("Please Say No One Else Is Dead")

Emmett is convulsing on the floor when Tegan arrives with her gin. She gives him CPR, to no avail. Emmett's body was later transferred to London under the orders of the other C&G partners. ("Say Goodbye") The order was signed off on by Tegan (who was instructed to do so by her bosses), leading Nate Lahey to believe that Tegan poisoned Emmett. ("Vivian's Here").

The FBI also consider Tegan a possible murder suspect, as she was the only person present when Emmett died. Tegan is cleared of suspicion after the London medical examiner determined that Emmett's death was due to a heart attack. However, a number of people (including Tegan) continued to believe that Emmett was poisoned at the behest of Governor Birkhead. 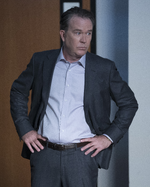 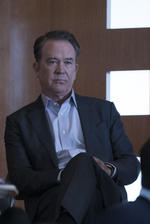 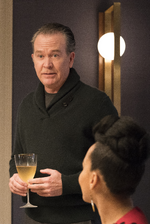 Retrieved from "https://howtogetawaywithmurder.fandom.com/wiki/Emmett_Crawford?oldid=28629"
Community content is available under CC-BY-SA unless otherwise noted.