"Everything We Did Was For Nothing"

"This is Dominick. He's a... He's a family friend."
—Laurel Castillo to her friends about Dominick[src]

Dominick Flores[1] is a supporting character and antagonist on How to Get Away with Murder. He is known by the audience for being Wes' killer sent by Laurel's father. He is also a friend or an acquaintance of Laurel's.

Dominick presumably grew up with the Castillo family. He fell in love with Laurel but the love was only one-sided and got Dominick in a lot of trouble with Laurel's father, Jorge. Dominick eventually started working for Jorge, doing his "dirty work". ("He's Dead", "Everything We Did Was For Nothing")

Dominick sent to Philadelphia by Jorge Castillo to take care of Wes Gibbins, the boyfriend of Laurel Castillo on the night of November 3, 2015. Once there, he entered the Keating House where he hid until Wes was alone. After making a phone call, Wes goes to put the phone down but he is grabbed from behind. Dominick injects Wes with a syringe. Wes elbows Dominick in the face and begins to feel the effects of the syringe. He picks up a vodka bottle and smashes it around Dominick's head and tries to make a run for it. He stumbles to the door but doesn't make it and falls to the floor. The effects of the injection take full effect. He slowly crawls to the door, using all of his strength while calling for help. Dominick comes up from behind and rolls him onto his back. He puts one of his gloves into Wes' mouth and squeezes his nose and places his hand over his mouth, suffocating him. Dominick then drags Wes' body through the house into the basement and unscrews the gas line. He then leaves it to fill the room. The flame from the boiler still burning, which ignites the gas and creates an explosion. After the house goes up in flames, Dominick sits in his car and rings Jorge. Connor runs past. He tells Jorge that they have a problem. Jorge only really cares whether Wes is dead or not. Dominick confirms that Wes is dead but it got messy. ("He Made a Terrible Mistake", "Wes (episode)")

Weeks after the murder, Todd Denver calls Dominick to get his hands on Wes' cell phone. Once retrieving it, Dominick meets Denver in his car on the top of a multi-story car park. Denver asks him if he has what he wants. Dominick reaches into his jacket pocket and pulls out an envelope containing Wes' phone which he hands to Denver. Denver snatches it out of his hands and examines its contents. After he is happy, he tells Dominick to get out. Later that night, Dominick notices Laurel going after Charles with a gun and intercepts her. She immediately recognizes him and hides the gun in her coat. He tells her to give him a hug and the two embrace. She asks him what he is doing in New York and he says work. Michaela and Asher arrive. They ask who the guy is and Laurel introduces him as a family friend. Charles sees that Michaela isn't coming and gets into the cab and dives away. ("Wes")

Noticing that Laurel and her friends are up to something, he finds that they plan to expose some of the bad things that her father's company has been responsible for. The night before the party, he then calls Laurel who is at her apartment and tells her not to go through with it. Acting dumb, Laurel asks him what he is talking about and Dominick tells her that her father knows she is pregnant and reminds her that he could know a lot more if he told him. The night of the crime, he goes to her apartment where he finds Connor on the phone to Michaela. Connor begins to talk about Laurel and Dominick reaches into his pocket to grab hold of his gun. Michaela tells Connor that Laurel should be at her apartment, but as she isn't something must have happened to her. Dominick hears Connor respond and leaves the apartment building as he realized that Laurel might be in danger. ("Live. Live. Live.", "He's Dead")

Later, he gets notified that there was a breach of their lawyers' security. He then goes to Caplan & Gold and questions Tegan Price about the breach in their security with the Antares Technologies servers. Tegan assures him that even though was a breach, they have no reported files missing. Dominick asks her how she is sure and she tells him that there are logs in place that show that nothing has been removed. Dominick is still not satisfied and asks for someone from the I.T. department to verify what she is saying. Tegan looks around and tells him that Lazlo has already gone home for the night but she will arrange a meeting with them for the following day. Dominick shakes his head and asks for the other guy who was a witness to the shooting. Tegan reluctantly gives him Oliver's name. He thanks her for her cooperation and leaves. He is then kidnapped by Frank and taken to a warehouse where he tortures him for information. Frank repeatedly asks him where the hard drive is (the one that Laurel obtained from Caplan & Gold). Dominick tells him that he didn't even know that there was a drive until he just told him. Dominick then plays on Franks emotions by reminding Frank that Laurel's baby isn't his. He tells him that he was in love with Laurel at a time but his love got him into a precarious situation with her father, Jorge Castillo. Frank punches him again. Dominick continues his mind games and Frank cracks and twists his head, breaking his neck. He then takes his phone and leaves. ("He's Dead")

Over the next couple of days, Frank wraps up Dominick's lifeless body and puts it in the back of Dominick's car. Frank holds onto Dominick's phone for a while, searching it for information. Once he is done with it, he disposes it along with the body and the car at a scrap yard where everything gets crushed in a compressor. ("Everything We Did Was For Nothing") 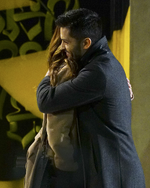